Pin It
That's right folks, its that time once again. Manic Monday Mania!  Coming off of the weekend and most folks are dreading going back to work or school or to just start the day to day grind of what the weekdays have to offer.

I am coming off of one hellish weekend. The twins were exposed to someone that was sick over the weekend when that sick person come to our house.  (You would think that family would know better!) Adam is sick. He started running a fever on Saturday night after our guests left. His fever has lasted all weekend long. He has a bit of a runny nose going. Keith is on the way to the pediatricians office right now. Amazingly enough, the other two have not caught it yet. I hope it does not lead to another bout of RSV but it probably will.

The rest of the weekend was the same as usual. No way to go anywhere (my van is shot and we can't fit all of us into the truck) so me and the kids stay here at home practically 24/7.  The only physical contact we get from the outside world lately is when someone decides to grace us with their presence. (Which is great, just please leave the sick people at home!)

To start off our Manic Monday Mania the right way I have chosen the 80's band The Fixx & their song "One Thing Leads to Another" from their album Reach the Beach. This song topped out on the US charts at # 4 in 1983. The words and video are below! Enjoy this Manic Monday Mania!

Pin It
I thought I would set this post in a nice bright red to go along with the Spiderman theme that we had at Lil Keith's 3rd birthday party last Saturday. It is amazing that he is growing up so fast. He was born on September 17th 2009. They decided to induce me with him because I had such a problem with my blood pressure. The beginning was easy. Then when I went into actual labor he got stuck. His shoulder was stuck and he was losing oxygen fast. A doctor stat  order was called to our birthing room. The midwife was actually on the bed with me trying to get him out and Big Keith almost broke my right leg pulling it so hard. It all ended well with Lil Keith weighing in at 10.5 pounds and being healthy.

Today I am including pictures of him when he was younger up through the years and finally his birthday party pictures. Enjoy!

Crazy Happenings Around my Home

Pin It
Normally I post at least a few times a week but last week and the beginning of this week was crazy. Last week I was preparing for Lil Keith's 3rd Birthday Bash! I had to clean the house and get all of the details for the party complete, order the cake and get all of the decorations for the Spiderman theme. It turned out to be a great party! I will post pictures soon.

To top that off I had the added extra stress of an uncontrollable ant problem. They have always been outside around in the yard but they decided to take up residence in my guest bathroom and in the kitchen. I tried everything from natural home remedies to the store bought ant traps and spray chemicals (bathroom only) but nothing stopped the little busy bodies. We relented and called
Terminix. They come out and the ant problem was gone before the party! YES!!

Thrown in all of the crazy happenings went the normal every day happenings as well. The twins never let me get any sleep. They both stay up until four or five in the morning. Big Keith is working 12 hour shifts from 6pm to 6am now so he is not home often. I get the brunt of the twins daily Monday through Friday and it is wearing on me. Of course you throw in potty training Lil  Keith and the house cleaning and laundry and it all equals to one tired Mama!

Finally after a successful party on Saturday and a relaxing Sunday it decides to rain. It rained hard too! Of course my internet went out when this happened and I had to wait for the phone company to come fix it. They sure don't mind billing you for services but they are rather slack when it comes to fixing the problem and God forbid if the problem happens on a Friday or the weekend. It will not get fixed until the middle of the next week if that is the case. I really wish that the cable company would run lines down our road... The essence of living in the country I guess. It has Major Pluses but it also has a few Major Downers too.

In a nut shell that has been my past week and a half. I hope to be back on top of things next week! 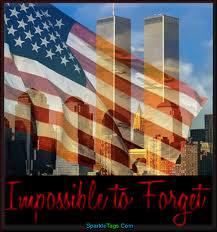 I will never forget this fateful day in history for as long as I live. I was at work when one of the work shop coordinators brought a tv to our room. I was working in the mental health field at this time and my client was at a work based program. Our class/work room was the largest in the building and 3 other classes eventually joined us to watch the live coverage of the towers burning and people struggling through the smog & smoke to make it to the boats to get off of the island. We were terrified and deeply saddened that this could happen in our homeland. Please say a Prayer today for all of the people lost, the survivors and everyone affected by this terrible tragedy. 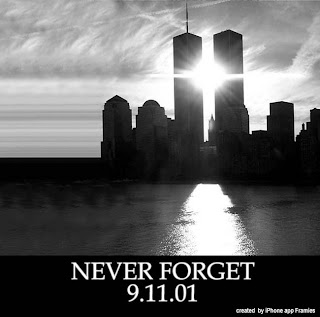 Pin It
Ok folks, I went to bed at 6 am and I am up again at 10:30 am.... Now what is wrong with this picture? I am just about dawg dead tired! No break from the twins last night that is for sure. Keith is at home and he got up when Lil Keith woke up and I thought he come into the living room to watch the twins while I got some sleep.... well guess what? He didn't , he slapped in Toy Story 2 and went to go sleep in Lil Keith's bed. So in a groggy haze I woke up to Elijah screaming his head off in the swing. When I finally cleared the fog out of my head I went in search of Keith, I was very disappointed to see him in bed. There are times when I just do not understand men. Normally he is not like this. The only thought in my head right now is that I really dread when he is old enough to have a mid life crisis!

I was suppose to have the Terminix man here at noon today to spray for ants both inside and outside of the house. I had to reschedule that. I am too tired and if I get both of the twins back to sleep I am taking Lil Keith and going back to bed!

Since I am quite sure that we are going to have a bit of an argument over this I chose Pat Benatar's  "Love is a Battlefield" for the Manic Monday Mania video of the day!

I hope everyone else is having a better Monday than I am!

Pin It
Well folks the weekend is now over for me.

I have been taking it easy this week so that means I have not been online very much. I will be making that up this week. I am re-cooping great since my surgery.  This week will be a very busy week. Little Keith will be 3 on the 17th and we are having his party this Saturday (15th). I am preparing for that and trying to get as much work done online as I can. The weather has continued to be hot and muggy. This evening was a great exception. It felt good outside when I went out earlier. I am hoping that this continues. I don't want cold weather but decent weather that will not make you melt each time you go outside.
The twins stood up yesterday for the first time. They are growing so fast. Both of them are crawling up a storm now. I will try to get a picture of them standing so that I can post it online. Little Keith is still the best big brother. When we go into the grocery store he will tell people that "those are his babies". It is very cute. They all three are growing very fast and giving me a run for my money. With the approach of Fall and the holidays I am trying to get the house situated. Before my surgery I did a major cleaning of the kitchen and living areas. This week I sorted through the clothes for the twins. They are growing so fast that I had to switch out sizes for them. (Thank goodness I still have a majority of Lil Keith's clothes for them to wear.) This week I will tackle Lil Keith's closet and dresser. I have some of my Fall decorations up & I will try to get pictures taken this week to post. We are also going to try to get out Fall/Winter garden going. I have some garlic bulbs to plant and I think I will plant some lettuce and carrot seeds as well. Not sure about anything else. The holiday are approaching fast. I think this Christmas will be a good one for us. I hope everyone else had a great weekend and that you will have a good week!
Posted by Unknown at 9/10/2012 05:15:00 AM No comments:

Pin It
I hope everyone is having a great Labor Day Holiday!  We are just sitting at home vegging out. Keith's family did have a big BBQ planned and we were going to go but it is just so hot and sticky outside and we are really just plain tired. Keith worked 12 hours shifts all week last week and as soon as he got home on Friday he showered and took me to the hospital for the surgery. I am one lucky woman to have him. After my surgery he did decide to stay home with me. I was rather loopy. His sister Kim stayed a while and let us get some much needed sleep! Thanks Kim!!!

I am linking up with blog hops and trying to figure out how to get Pinterest share link to work... GRRRR... I am not code smart!!